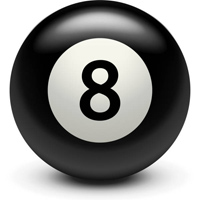 Grab a cue and rush over to the lush green table covered in felt. It's time to play some free pool. 8 Ball Pool to be exact. Can you handle a game based on the coolest sport of them all? Show off your billard skills by shooting balls into one of the six pockets of the pool table. Like most pool games, the challenge lies in beating your opponent to the punch. Be the first to sink your set of billiard balls into the table's pockets.

You can freely choose the angle and the force with which you hit the white cue ball. Make sure your shot is not too forceful as that will mean you lose control over the arrangement. But don't give your cue too little power, as you may not be able to score points that way. You are going to need a steady hand and a cool head if you want to make it in 8 Ball Pool!

Don't forget to take swerve, drift and ricochet into account as you play. Your aim may be spot on, but if your angle isn't precise nobody knows where your shot will end up. It may bounce off the rim and crash into a ball you didn't mean to hit. Or it may chaotically swerve off and just set your opponent up for safe and easy shots! It's not unheard of for a shot to miss the mark so badly, that you end up scoring for your opponent instead. How embarrassing for a true pool maniac! It's hard to compete against another player if your break shot ends up with the cue ball in one of the pockets. At least it wasn't the black ball, because that might make even the most level-headed player smash their pool cue on the table. You want to be the first player to be done pocketing their half of the balls to win the game. Make that free cue stick turn you into the master of 8 ball pool games.

Still, if you know your way around pool games, you can enjoy the elegant moves of precise, almost geometrical action unfolding on the table. A great pool player doesn't just appreciate it, a good player knows how to recreate it from scratch. Watch the dance of round objects bounce back and forth before they disappear. Just make sure that the cue ball always stays on the table, or you might forfeit your turn. An 8 ball pool game like this proves that it doesn't take rich visuals and massive multiplayer support to be fun and addictive. With a solid physics engine and a reasonably skilled computer opponent, you can spend hours just playing billiard and having a great time.

The rest of the balls on the table are divided into two halves. One is solid-colored, the other only has a colored stripe running around it. They are fittingly referred to as striped balls. The linguistic wonders of billiard never ceases to amaze! As soon as you sink the very first ball, the corresponding set becomes yours to pocket. In order to win the game, you will have to sink every one of your balls into the pool table's pockets. But make sure that the eight-ball goes last, otherwise you've lost the game immediately. That's the challenge and the fun of 8 Ball Pool in one go.