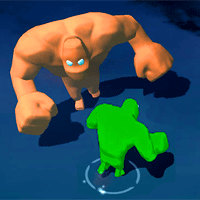 Punch all the crap out of other players running through the dark and creepy land in the funny multiplayer online game Brutesio! In the role of a cruel brute you have to hit, punch and beat other players in order to collect their points and become the biggest and strongest one! Your character is really small and assailable at the beginning, but the more orbs he collects the closer he will get to the next level. Your character will grow more and more every time he gains a new level. Beat other players who are smaller or equal in size to you to collect all their points.

There're two types of attack in Brutesio: quick punch and charge up punch. Quick punch allows you to respond to the attacks from other players instantly, whereas the charge up punch can cause more damage and kill your opponent faster. The map is also full of useful power-ups and bonuses, which will help you to survive for a longer time. In Brutesio you should not only be aware of other angry players but also of falling off the edges of the map, once you fall down you will die and have to start over again. Like in all fighting IO games the main goal of this game is to become the biggest among all other players. If you are the best and strongest player, then a crown will appear above your head.

How to Play BRUTES IO

Use WASD or ARROW KEYS to move and direct your character in Brutesio and click with the mouse to punch your opponents. Your current mass is depicted in the bottom right corner of the monitor, it will also show you how much more mass you need to reach the next level. In Brute IO players can also customize their avatars by choosing a color and a nickname.