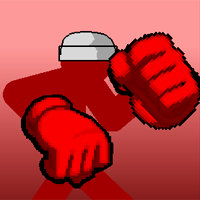 Combat Tournament is an awesome stickman fighting game. Aim of the game is to fight as long as you can. Move with arrow keys and jump with SPACE. Attack with A and press S to do a special move. Press P to see the full combo list. In the beginning you can choose between three fighter: Homerun Bat, Mr. Slaptactic or Double Range. Play a tutorial to train your moves or start with a battle against three other player, to see if you can fight. Or enter a duel to play 1 vs 1. If you are confident with your fighting moves challenge yourself in a 6 waygame and defeat all your opponents.

Once you have proven yourself to have mastered the arts of this fighting game, new tournaments will get unlocked and you can put uncountable enemies to rout with your combat skills. Change between the different avatars to find out which fighter works best for you and show no mercy when it comes to beating your objectors. Are you ready for this quick and challenging combat? Find out and have fun with Combat Tournament, online and for free on Silvergames.com!