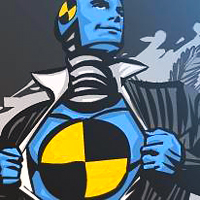 Crash Test Launcher is another cool ragdoll shooting game inspired by Dummy Never Fails. Aim of the game is to launch a crash test dummy as far as you can. Press A or D to drive and Spacebar to use nitro. Along the way, your funny dummy will fly over all sorts of things and will get a punch every now and then to make him fly even further.

In between levels you can buy all sorts of upgrades to make your Ragdoll go further in the next round. For example, how about a better car, a rocket for a turbo launch or an iron skull? Just try to get as far as possible, earn a lot of money and spend it right back in the store. Have fun and success with Crash Test Launcher, another free online game on Silvergames.com!

Lego Ninjago: Flight of the Ninja