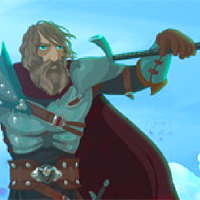 Dragon Age Legends is an awesome Hack 'N' Slash RPG made by EA and the indie game developer Pixelante. Your mission in this side scrolling action game is to fight your way through hordes of demons and spawns of evil. Ravi set off on his quest with a heavy heart. Viscount Khedra, his uncle, had become an abomination.

As a templar, Ravi knew it was his duty to destroy the demon but he could not stand against such powerful magic on his own. He set out on search of powerful artifacts once owned by a mythical demon hunter Evra. If he obtained Evra's fabled gear then he would surely be able to resist the demon's powers and save the city of Kaiten. Play the official Dragon Age Legends online in your browser on Silvergames.com!