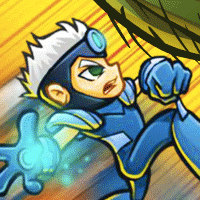 Epic Boss Fighter 2 is a great defense game in which you'll have to dodge the attacks of various evil creatures and survive. And once again, humanity is in danger, since disgusting evil creatures from a distant planet are on the march to destroy Earth. So quickly get into your hero outfit and go into battle against the first boss.

Try to avoid his attacks as much as possible and collect gold pieces for upgrades. In each subsequent level, the attacks will become even nastier and more aggressive, so get ready for anything and then rush into battle. Can you defeat all the nasties in Epic Boss Fighter 2? Find out now and have fun with this cool free online game on Silvergames.com!