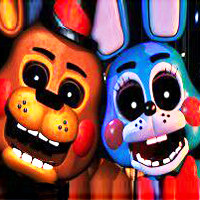 Five Nights at Freddy's 2 is an online horror survival game where players have to guard the restaurant and fight robot plushies. You got the summer job you applied for at Freddy’s Pizzeria, the fun family place with the friendly looking animal robots and toys. Your task is to spend the night over there and keep an eye on the cameras, nothing to worry about.

Don’t mind the rumors about the robots being cold-blooded assassins, you know how people blow things out of proportion. You can start right now, you’ll have a flashlight and a mask, just in case. Just relax and enjoy your new job at five nights at Freddy's 2. Oh, and keep the music box playing, don’t let it stop. Some characters at five nights at Freddy's only seem to be nice but all the players should always be aware, it might be a trap. Enjoy this fun game Five Nights at Freddy's 2 for free on Silvergames.com!

Slendrina Must Die: The Forest
❯