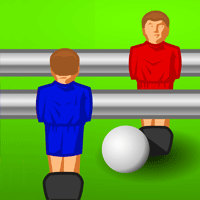 Foosball 2 Players is a classic table soccer game in which you can compete against either the CPU or a friend on the same keyboard. Play a short match or try to beat your opponent in a tournament. The rules are simple: to defeat your opponent, you must be the first to score five goals.

To do this, move the handle bars up and down with the WS keys or the arrow keys so that your players shoot the ball into the opponent's goal. Also, always keep an eye on your goalkeeper to be able to block possible attacks from the opposing team in time. You'll need a lot of speed and skill to make it to the top of the leaderboard in this ball game. Have fun with 2 Player Foosball, a free online game on Silvergames.com!