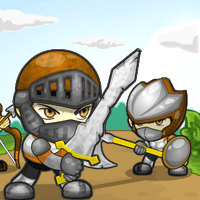 Imperial Battle Tactics is a great strategy game in which you have to give your all on the battlefield. You've landed in the time of the knights, in which people fight for honor and glory. However, it's also a matter of life and death, so give it your all. The goal is to defeat the enemy armies.

Work your way through the entire empire with your troops until even the last resister is under your command. In doing so, you will have to be strategic in order to not unnecessarily test the courage and bravery of your fighters and to get as many of them through alive as possible. Are you ready? Have fun with Imperial Battle Tactics, a free online game on Silvergames.com!