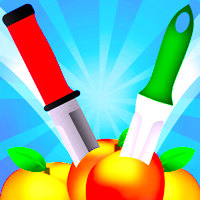 Knife Flip is a cool, medieval-themed game. Your goal is to throw the flipping knife in the air in order to make it land blade down on the ground collecting as many coins as you can to buy new weapons. You lose when the knife lands on its grip. You can also play the fruit mode, in which you have to slice fruit in half to earn coins.

Set the highest score possible and become the legendary master of the Knife Flip. As this game's object is rather easy you can just train this one skill as many times as you have to in order to become the master of knife flipping. Can you do that? Find out now and have fun playing Knife Flip online and for free on Silvergames.com!