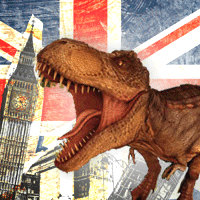 London Rex is a great dinosaur destruction game in which you'll be able to go around the city with the giant animal and cause as much destruction as possible. Sounds fun? It is! After the T-Rex has already destroyed half of America's west and east coasts, it's off to Europe in London Rex. In the overcrowded capital of England, of all places, the destructive monster thinks he can find happiness.

Help the dino to cause a lot of damage in the city, destroy cars and eat people. Try to reduce the whole London to rubble with the Rex and who knows, maybe even the Queen will end up on his plate. Have fun with London Rex, another free online game on Silvergames.com!