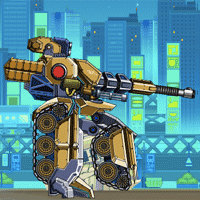 Robot Tank is an awesome science-fiction puzzle game in which you get to assemble your own futuristic Robot Tank and send it to battle! Use your awesome mecha powers to defeat your enemy in a turn-based combat. If you are a fan of both robots and tanks then this mash up game is exactly the right one for you!

Destroy robots, use different tanks and rain war upon your enemies on this cool game! It takes quite a bit of expertise to assemble those awesome robot tanks as they require a ton of parts to be as powerful as they are. Try to find out all special attacks of your machine and good luck winning the battle. Much fun with Robot Tank on Silvergames.com!

Battle for the Galaxy