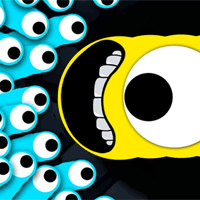 Slither.io is a free multiplayer survival game where you have to control a snake and help it grow. In this online snake game, you move around a map collecting glowing orbs. Every orb your pick up lets you grow a little longer. But be careful, if you ever crash into something headfirst, like your own tail, or another player, you vanish. Use your left mouse button to dash. Dead snakes turn into collection of orbs for other players to pick up. Keep moving and evading other players until you've become the biggest and strongest in Slither.io.

You can also unlock new skins by sharing the game in social media. Name your character before starting the game and choose a color. At first you will be just a tiny snake but every collected orb will make you grow bigger. Play slither.io against other online player and invite your friends.