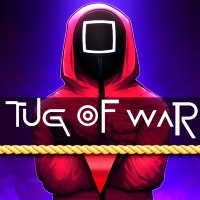 Squid Game: Tug of War is a cool one button game for 2 players about one of the cruel games shown in the Squid Game TV series. If you have already seen the popular horror series, you sure will know how this game goes. Most children all over the world play a way more safe and innocent version, but today it’s going to get a bit drastic.

On every side of the screen there will be a group of players, which will have to pull the rope as hard as possible in order to pull the other players to the middle of the screen. The thing is, there’s only a guillotine in the middle, that will cut the rope, making the losing team fall into a painful death. Are you ready to play this bloody competition? Have fun playing Squid Game: Tug of War, a free online game on Silvergames.com!