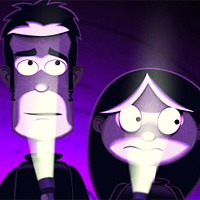 Vortex Point 2 is a great point and click game in which you have to help the investigators Kevin, Craig and Caroline to find a missing girl. Does paranormal activity really exist? The P.A.S.T., consisting of three pals, was invited to help the police by solving a new crime. Find out what happend to the missing girl Selena, who simply wanted to go to the toilet and then suddenly disappeared.

The two friends Hailee and Selena were having a great night together when they decided to take their pictures in a photo booth. Selena went to the rest room while Hailee waited for the pictures. When she finally saw the pictures, it was a huge shock: on the photo were not only the two friends but also a masked man who was strangeling Selena. Creepy right? Do everything you can to solve the crime and much fun with Vortex Point 2 on Silvergames.com!