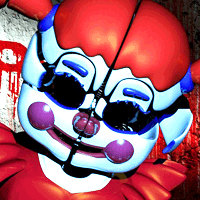 Five Nights at Freddy's is a free horror survival game centered on the story of Freddy Fazbear's Pizza. All you have to do is spend five nights in Freddy's Pizza place, filled with scary animals. You play a lowly security guard who has been given a seemingly menial task. You only need to make sure nothing bad happens over the course of 5 nights. But before you realise what you've gotten yourself into, you notice that this simple sounding job is actually more of a nightmare. Terrifying creatures are coming for you in the dark, and the only tool to stop them are the heavy doors.

The online horror game Five Nights at Freddy's by creator Scott Cawthon has a delightfully simple premise. Do you think you will make it out alive? Or will you become another hapless security guard who disappeared without a trace from Freddybear's place? The ground-breaking horror game series FNAF is now playable online for free. That's right, you can dive into the creepy atmosphere of an abandoned pizza parlor stuffed with harmless toys. All you need to do is survive five nights in a row to win the game.

Five Nights at Freddy's has become a cult game that has taken the horror gaming scene by storm. With its clever use of scary characters as fear-inducing threats in the shadows, it managed to tap into childhood fears that every gamer is intimately familiar with. Night after night, you will be stuck in your guard room alone, observing the feed from security cameras. First it will seem as if nothing is going to happen. You might even think that as long as you don't make any sudden moves, things will be uneventful and peaceful. But scares aplenty are waiting for you in FNAF world. The nightmare is about to begin.

Five Nights at Freddy's was so successful and well received, that it spawned numerous sequels. Among them FNAF Sister Location, which tells a parallel story to the original game. Or even Freddy Fazbear's Pizzeria Simulation, which begins as a harmless pizza delivery game. Despite these spin-off games apparently veering away from the orginal's game template, they still manage to scare players online. Watch the kid-friendly animatronics turn into a frightening menace at the stroke of midnight. Don't get caught off-guard by the cunningly placed jumpscares. Only your cleverness will help you prevail and make it to the end of this pizza-themed horror show.