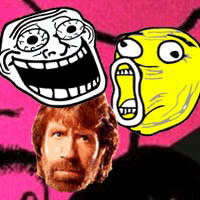 Meme Slash is a hilarious game created by SilverGames. Your object is simple: hack and slash through the bouncy meme faces, but avoid to touch the bearded super Chuck Norris or he scares the shit of you and you will lost a life. There will be plenty of funny meme faces appear on the screen and all you have to do is cut them in half. Easy, right?

Once in a while the head of the one and only Chuck Norris will fly up the screen, so always be aware to not cut him, cause he won't like it. Once you touch his face, your game will be over and you have to start all over again. Are you ready for this ultimate challenge? Don't disappoint Chuck and have fun playing Meme Slash online and for free on Silvergames.com. Game on!