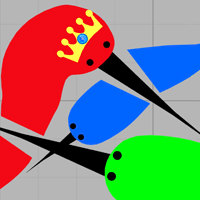 Narwhale.IO is a free online multiplayer game about the survival of the fittest, and kiling everyone you see. Narwhales are generally peaceful sea creatures that travel in groups of five to ten. Among each other they use their tusks to establish social hierarchies or as a natural addtition to their senses. Unfortunately peace, love and understanding does not make for great online entertainment. Fortunately, the internet has taught us much about what people are like and what they enjoy doing. Next to shopping, chatting and watching cat videos, people seem to love nothing more than to kill each other online!

In this crazy, battle royale style game you control a narwhale with a proud tusk on its head. It's your job to hunt down other narwhales and expertly cut them in half. Doing so will kick them out of the game, but it will also make you stronger and more powerful. As you slowly grow and become more fearsome, others will be coming for you. They will try to use your massive size against you and attack you from different angles. All for the chance to kick you off the leaderboard. But there is a way to avoid the catastrophe. Kill them before they kill you. If only normal life was that easy. But don't get complacent. Every other player in the game is out to get you and be king of the narwhales themselves. Keep slicing up others and killing them to become the biggest, baddest and meanest narwhale there is. Make no mistake, it is going to be a big bloody fight to the death. Go head to head with players from all over the world and see where you rank. Here it's everyone for themselves! Are you ready? Welcome to the public war zone that is Narwhale IO!