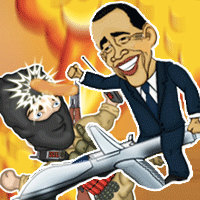 Presidents vs Terrorists - It's time for the most influential leaders around the World to reunite and go in action by themselves to get rid of the terrorist plague! Help Barack Obama, Queen Elizabeth, Merkel, Putin, Hollande and Kim Jong Un to swing the racket and toss the evilness out of our universe! The further you can fling the radical goon the higher your score.

Above and beyond you can trigger rocket strikes, throw Maßkrugs filled with tasty German beer and let the rainbow pooping putin bear out to rip the terrorists in pieces. How far are you going to make it in this ridiculous distance game? Find out now and enjoy the Presidents vs Terrorist showdown, another free online game on Silvergames.com!

I Am Flying to the Moon