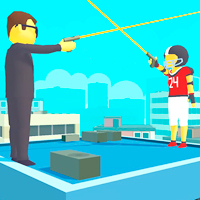 Ragdoll Shooter is a cool one button duel game with ragdolls in which you shoot at your CPU opponents to win stage after stage. You can play this game online and for free on Silvergames.com. Shoot to make the arm of the ragdoll move, and just keep shooting like a maniac to make the gun point directly at your enemy. Hit your opponents in the head to win the duel with a single shot.

Win money for every win and try to kill all your opponents before they get to kill you first. No matter if you are on a rooftop, on top of a moving car, or in the middle of the streets of a deserted city, you have to kill all those bastards. Have fun playing Ragdoll Shooter!