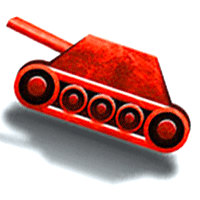 Play ShellShock Live 2, the next installment of the fun action-packed online multiplayer artillery game with an emphasis on leveling up and upgrading tanks. Players control tanks and fight in spectacular battles against each other. You can demolish your opponent using a wide array of weapons, such as grenades, stones, flame and much more. The action takes place on the uneven terrain with deep valleys and hills, that's why you must not only choose the right weapon, but be also very careful choosing the direction and the strength of the shoot. The team which eliminates all enemies first and collects the most points - wins! Each player in the Shellshock Live 2 starts with the same tank and limited amount of different weapons, but during the course of the game players are able to improve their tanks, unlock new tank models and weapons.

To get to the higher level and unlock new stuff you need experience points, you can gain them by shooting enemy players. To join a match Shellshock Live 2 you simply have to choose and enter a room with other players. There also single matches, which allow you to compete with another player's tank one on one, in addition to this you can also team with other player and fight against other teams like in the first installment of Shellshock Live. Once the match has begun, all players are in charge to shoot in order one by one. You have only 45 seconds to plan and execute your turn. Before you start the game you can try all the weapons in the 'Firing Range' mode or create crazy maps in the 'Creator' mode.

How To Play SHELLSHOCK LIVE 2

Controlling your tank in Shellshock Live 2 is very easy: press A and D to move, W and S to change the weapon and SPACE to shoot. To aim, you can use the MOUSE or ARROW KEYS. To communicate with other players press ENTER and join the chat.