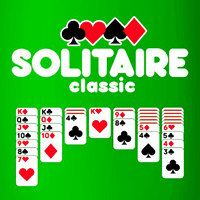 Solitaire Classic is a free card game that can be played by a single player. Solitaire Classic may be such an enduring online game, because not everyone has the privilege of a table full of capable card players to enjoy a refreshing card game. Easily playable with a standard deck of cards, the straight-forward rules of how to to stack, sort and arrange the cards still allows for both relaxation and interesting decisions.

Put very simply Solitaire Classic is a very fancy and playful way of sorting cards by suit and color. After shuffling the cards and laying out seven piles, you follow a fairly simply rule. Every face-up card can be placed on top of another face-up card, provided it is of a different color, and directly descending in order. So a red 5 may be placed on top of a black 6, but not vice versa. A diamond card may not be placed on a heart, or a spade on a club.

There is a reason why the game is called Patience outside of the US and Canada, as it can be a very relaxing and easy-going way to spend some time playing cards. The game is believed to have originated in Germany or Scandinavia, with the earliest mention of it in a game anthology from 1788. It saw a rise in popularity in the 19th century and most recently became part of the pop cultural landscape thanks to its inclusion in the basic software package for the Windows operating system.

The first klondike solitaire game became such a wide-spread and popular time-waster, that its victory animation is now part of the most digital versions of solitaire classic. To add a sense of competition to the classic 1 player card game, a timer has been added as well as a counter that tracks how many reshuffles were needed to complete the solitaire game.

With each game you get to be a little more practiced in planning ahead, scanning the columns for opportunities to sort cards and step by step speeding up your game. Can you split this column here and slide a 6 of clubs in? Will that open up a spot for a King to start a brand new column? Once the aces are out, you can start removing cards from the columns and into their respective suit deck. How fast can you wrap up a game of Solitaire Classic? Find out here!

Where Is Walter the Wacky Walker

Day of the Tentacle

Shaun the Sheep: Flock Together