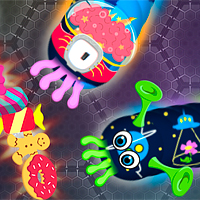 Wormate.io is a free multiplayer online game about eating candy to become the longest and most powerful worm in the arena. Join a world of fast-paced living and dieing in this brightly lit arena of hungry, slithering beings. Much like many other IO games in the series, with Wormate you collect to grow bigger. As you grow bigger, you become more dangerous and powerful compared to the worms only just starting out. Use your length to cut off their movement and make them crash into either your body or even their own. As soon as they do, they are eliminated from the game and their remains are replaced by delicious sweets. Ready and ripe for the taking, provided you have the courage to slide into the fray.

Everybody and every worm wants to collect donuts and other sugary delights! After all, that is how you become big, strong and diabetic. Among the things you will find on this very crowded playing field are special abilities, that speed up your worm or boosts that expedite your growth. With the simple click of a mouse button you can make your slippery character lunge forward. Make yourself longer as you hurry to quickly get from one place to another. It's funny how racing other players to a piece of licorice or a cookie can be so tense. Wormate requires attention, because there is always the chance of some ridiculously skilled boy sitting at the other end of the world cutting you off and turning your carefully curated snake into a glitzy collection of chocolate, cake and licorice.

As you play to improve your rating in Wormate.io, you will eventually turn the tiny little snake into a proper monster worm ready to take on everybody in IO world. It all starts off reasonably simple and deceptively relaxed. You stroll across a wide open area of the map without a single care in the world. You engorge yourself on all kinds of sweet indulgences. Before long you will realize that sliding around an increasingly overcrowded map becomes a real challenge. You will need some lightning fast reflexes to avoid colliding with other players and ending your run. On the other hand, if you manage to cut off other players just right so that they can't help but run head first into your body, you will be awarded a cornucopia of sugary goodness.

Take your snake on an exciting io adventure, as you slither across the map. It will be down to your player skill to make it to the top of the leader board. Boost yourself forward to grab those tasty cakes and eat them. You may have played other snake-themed games before, but none as addictive as this one. Control your happy elongated friend well to grab that elusive high score and dominate the game. Make no mistake Wormateio isn't a small squabble among four to eight players, it is a huge free for all battle, with over a hundred individual worms chasing after sweets and trying to eliminate their competition.