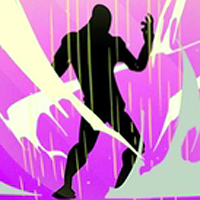 Arcane Weapon is an epic fighting game in which you'll be able to use your mysterious powers to confront terrifying creatures from the underworld in a thrilling 1:1 duel. Fight and earn your way to glory in this intense fantasy style tournament using your powerful Arcane Weapon. Strike down your devilish and occult opponents as you try to gain coins to increase your skills and impenetrable weapons continously. In each battle it's about using your weapons skillfully and tactically to defeat the monster.

Collect bonuses and money coins and make upgrades between battles. You can buy special attacks and then use them in battle to get your opponent around the corner. Each level you'll face a stronger opponent, so make sure you're well prepared. Do you have what it takes to eliminate any enemy, no matter how powerful? Find out now and have fun with Arcane Weapon on Silvergames.com!