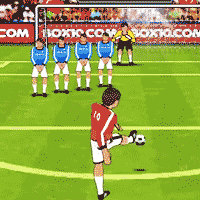 Euro Kicks 2016 is a great penalty shootout football game in which you can become a superstar of free kicks. In each round you have 10 shots. Kick the ball powerful and precisely to pass the goalie and the defensive wall of players in order to score a goal. You have to press the space button to set your direction, curve and power - but pay attention to the wind.

Select a team and then make sure every shot makes it into the goal so that the keeper doesn't stand a chance. Are you going to make it to the finals in this super fun shootout match? And do you think you can beat your rivals score in each match of Euro Kicks 2016? Find out now and have fun with Euro Kicks 2016 on Silvergames.com!