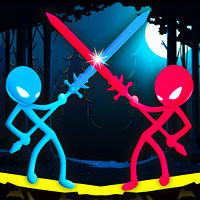 Stick Duel: Medieval Wars is a fun stickman battle game for 2 players in which you have to fight against your opponent standing on strange wheeled platforms. In this free online game on Silvergames.com you will get to use all sorts of medieval weapons, such as spears, swords or axes to brutally kill your enemies.

Play this game against the CPU or invite a friend over to play together on the same computer. The first one to win 5 rounds wins the match. Try to hit your rival’s head to defeat him faster, or just make him suffer longer. Have fun playing Stick Duel: Medieval Wars!