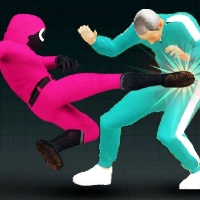 Squid Fighter is a fascinating fighting game for 2 players to take part in the most amazing hand on hand duels against the evil masked characters from the popular TV show. The Squid Game is a horror television series in which participants have to put their lives at risk to earn money. Today you will fight to death as one of those masked men or as a desperate participant.

Enjoy this free online game against the CPU or challenge another player to compete on the same keyboard. Kick, punch and throw special attacks at your opponent to defeat him. The first player to win two rounds wins the fight. Have fun playing Squid Fighter, another awesome free online game on Silvergames.com!