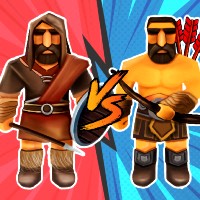 Medieval Battle 2 Player is a cool battle simulation game for 2 players in which you have to send out different units and build up the perfect army to fight your enemy. In a real battle, you couldn’t just send a couple of swordsmen to fight a whole army of enemies. Also, a bunch of archers could never stand a fight against fierce incoming warriors. In this free online game, you will have to think wisely and plan different starting positions for every soldier.

Use warriors with shields and spears, swordsmen and archers, and try to find out the best number of each one of them to beat your enemies. You will have a limited amount of money to hire them, so spend it as well as possible. You can play against the CPU or challenge another player to see who has better strategic skills. Have fun playing Medieval Battle 2 Player online and for free on Silvergames.com!