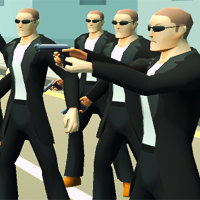 Mob City is an amazing shooting game that you can play online and for free on Silvergames.com. Take on the role of an epic, good looking action hero and shoot the crap out of your attackers in this fun-addicting shooting game Mob City.

Step into a city packed with enemies and kill them all before they shoot you down, while trying to complete different kinds of missions. Find cash, painkillers, refreshing beer cans, weapons and more, and use powerful guns to blow up cars and buildings. Use your unique hammer-time to slow down time and act faster than anyone else. Good luck and have fun with Mob City!