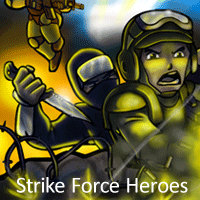 Strike Force Heroes is a great action shooting game in which you have to defeat a group of masked enemies. Some days you just can't catch a break. This time a masked group of armed men has taken over your research station and killed your colleagues. It's up to you now to grab a gun and defend yourself. Maybe help will come soon? In Strike Force Heroes you control a character in a 2-D environment trying to take down enemy forces and staying alive as long as you can.

But don't worry, even if they do manage to get off a lucky shot, after a few seconds in the penalty box you will simply respawn and be ready to take dish out some carnage again. Crawl through narrow shafts, explore rooms carefully and bring the battle to the enemy! Join the mayhem in this crazy action shooter called Strike Force Heroes on Silvergames.com!