Push Trump Off A Cliff Again! 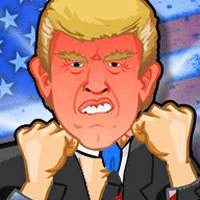 Punch The Trump is a super fun boxing game in which you will be able to vent your anger at the former American president. So get ready for an epic fight against Donald Trump! In this funny boxing game you have the chance to beat up the former US president for all the nonsense he's been saying all the time. So what are you waiting for?

Raise your fists and throw a few rights and lefts in Trump's face until he turns green and blue. There's no limit to your rage here, so hit him hard and maybe he will finally shut up. Are you ready for the virtual fight of your life? Have fun with Punch The Trump, a free online game on Silvergames.com!

Push Trump Off A Cliff Again!