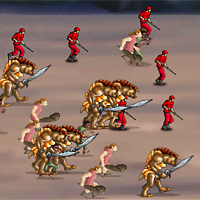 Heroes Battle is an addictive strategy game made by Belugerin Studios. Thousands of heroes are fight for glory. Who will be the winner of the battle? Make your troop of fighters as strong as possible by upgrading their number and their defensive and attacking skills. You can also upgrade their age of defense, myth wars, battle gear and humaliens, to make them undefeatable.

Every time your troops storm out to meet their enemies you can only hope for them to be strong enough to defeat them and end the battle by winning it. Do you think you are going to make it far in this fun battle upgrade game and be the ultimate hero on the battlefield? Find out now and have fun with Heroes Battle, online and for free on Silvergames.com!