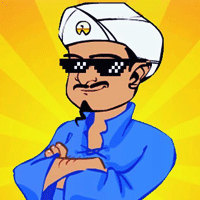 Akinator is a free online guessing game where the main character is trying to read your thoughts. Come and face the mighty guessing powers of the ingenious Akinator. The powerful, magical being that can deduce almost any character living or dead by simply asking you 20 questions. Think you can challenge him online for free?

How does Akinator work? Try thinking of a specific person, real or fictional, and all their attributes. Through a seemingly random list of questions covering some strange and unique aspects, the Akinator will slowly narrow down the possibilities of who it could be. So be sure to know as much about the person in question as you can. It can be their physical features. Like their hair colour, body shape, age or gender. You may also have to answer questions about their career, the work they're known for or even their political opinions. Even if you don't know the answer to every single question, there is a good chance that your secretly thought up character will be guessed by Akinator. It's not easy to answer the 20 questions online and to win against Akinator the web genie.

The Akinator is based on a continually improving algorithm that feeds on the information its users give it. Every character that isn't correctly guessed, can be added to the database alongside with the answers given prior. By doing so the genie's knowledge grows and their ability to distinguish between various collection of attributes and features until only one name remains expands.

Imagine cross-referencing an enormous library of characters, all of which are listed with a number of specific attributes that can be verified by the person playing the game. As you move from answering one question to the next, the list of potential names is narrowed down until the Akinator knows exactly what thoughts are in your head as you play. It sounds creepy, or even mystical, but it is really just a way of solving one of the oldest games with the help of modern technology. It's more than just 20 questions, it's a way to pit your imagination and creativity against the powers of a digital genie.

What will it take to outsmart the genie? An obscure children's book character? Maybe the protagonist of a Japanese cult film? Or the colourful heroes of your favourite videogame series? Or will you try to outsmart him by picking yourself? Somebody from your family? The Akinator knows all and sees all. Sounds unbelievable? Why don't you try it out right now, and see just how predictable you really are. Enjoy Akinator the genie, a free online game for fans of mystery!

Who Wants to Be a Millionaire?

Will You Press The Button?

Who Wants to Be a Millionaire?