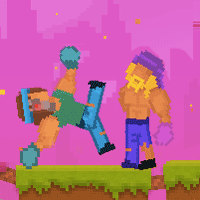 KABOOM! Mixed Macho Arts is the right choice for you to play if you are addicted to ultramasculine action, adrenaline and ragdoll-physics. You can choose the single player mode or you call your friend to play this awesome pvp fighting game with silly cocky pixel characters. Surrounded by a sea of hot lava you have to fight against another macho.

Try to smash your opponent hard enough to win this brutally crazy brawl. Use the keys A and D to move and give your opponent what he deserves. Try to keep a safe distance from the hot lava or your fight will be over rather sooner than later. Are you ready to put your opponent to rout? Find out and much fun playing Mixed Macho Arts, online and for free on Silvergames.com!

Sands of the Coliseum