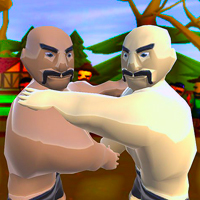 Oil Wrestling is a fun addicting game for 2 players and you can enjoy it online and for free on Silvergames.com. There’s only one way of making wrestling more fun: adding oil to it. Get ready for some hilarious fights against your best friend on the same computer, or against the skillful CPU.

Take on the role of a big fat wrestler and try to defeat your opponents 5 times to win the match. Just push your rival to the ground and make him land on his back to win. The clumsy little legs of the two fighters make it difficult to control your movements, but practice and become the ultimate Oil Wrestling champion. Have fun with Oil Wrestling!