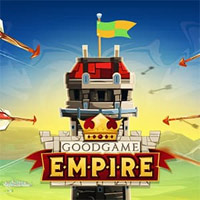 Goodgame Empire is an online war strategy game by Goodgame Studios, in which you build a powerful empery. You have been entrusted with your very own castle but you own still a small empire. It's now up to you to expand it and turn it into a huge kingdom. Build houses for your people, so that they can help you gather the means to grow. Be an impressive emperor , recruit new armies and lead them into battles to conquer new lands. Or seek an alliance with other players. It's a viable strategy in this online empire building game to find people to join forces with.

Your kingdom needs more than just a big castle. It needs a good leader like you to make it into the most glorious empire of four kingdoms. You are free to forge your own path as you play, enacting your strategy. In Goodgame Empire you will rise and fall based on how well you play. Use your multiplayer alliances as security before taking on scarier enemies.

(Read more ..)Only with the help of a rock solid strategy will you be able to build your empire and lead it to victory. But those things do not come free. A good emperor has to work and plan for it. Prepare your rise to power by building a massive army first. But don't get complacent. Your enemies are doing so the same, so make sure your home is well fortified. You will have to defend it against villains and robbers alike.

Goodgame Empire belongs to the genre of real-time-strategy games. These games are not played in turns, but let you give orders and commands whenever you want instead. Carve out a place for yourself on the huge world map. Alliances let you find players to chat and share ideas with. Choose knights and legendary heroes to lead your armies. Keep in mind that every order takes time to execute. If you don't want to sit around staring at your screen waiting, you can spend rubies to skip the waiting time. You can also rely on the true and tested approach to getting what you want: take it from those weaker than yourself. That's right, you can just invade somebody else's kingdom. Pillage and plunder for fun, or because you want their property.

While Goodgame Empire is free-to-play online game, you have the option of speeding things up with virtual money. Like most similar games, this isn't necessary to advance in the game. Become king of your own empire by hoarding resources and power. Explore Goodgames Empire game and its deep gameplay!